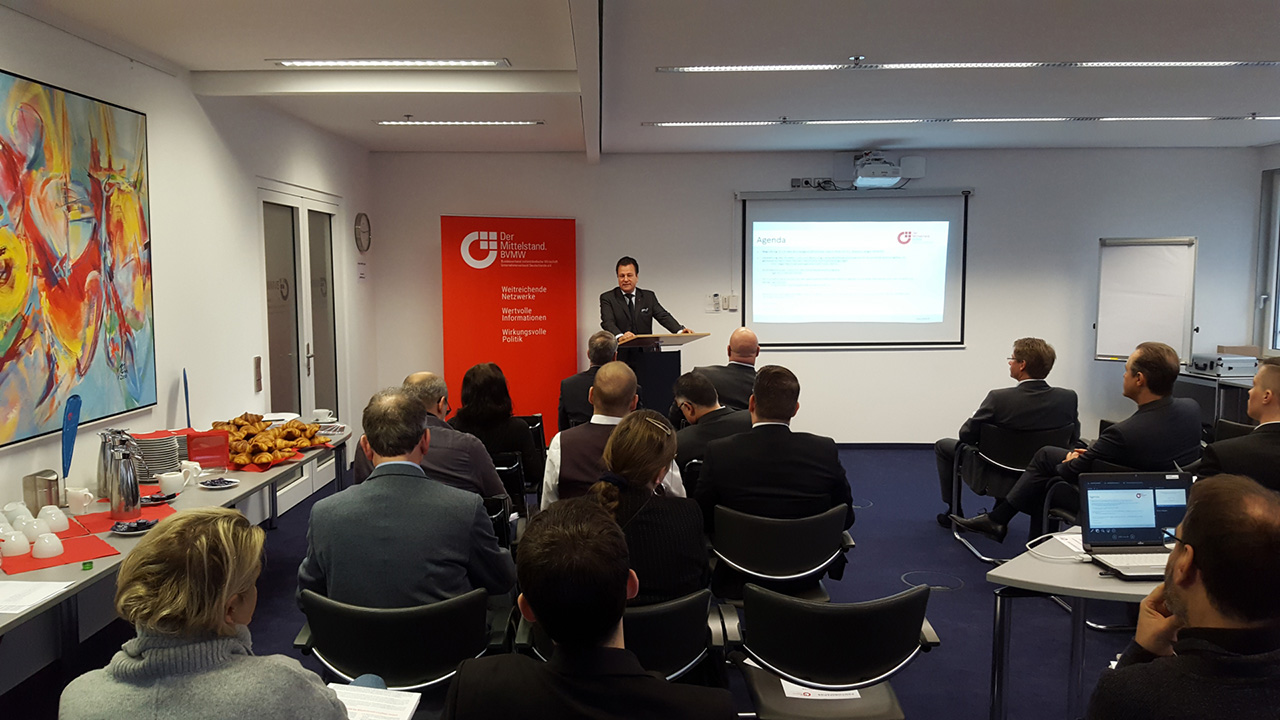 Since last year, DSC Legal has been actively supporting the German Association for Small and Medium-sized Businesses, the German Business Association e.V. (Bundesverband mittelständische Wirtschaft, Unternehmerverband Deutschlands e.V. - "BVMW") in the implementation of its new SME initiative "Job plus Dwelling" (German: „Job plus Wohnung“). The initiative goes back to a position paper of the BVMW in which the association (it represents more than 900,000 businesses together with its cooperation partner associations) called for policies to improve the framework conditions for the construction of company-owned apartments. Author of the conception and the position paper is the attorney-at-law and notary public Dr Peter Diedrich (Managing Partner of DSC Legal), who serves in an honorary capacity as spokesman for the Legal Committee and Deputy Chairman of the Arbitration Panel of the BVMW.

Trigger for the BVMW initiative is the acute shortage of housing and specialist staff, which is particularly noticeable in the major conurbations. In Berlin, Frankfurt, Munich, Hamburg and other major German cities, where living space is becoming increasingly scarce and expensive, well-paid and qualified specialists often have no chance to rent an affordable flat. At the same time, companies are sometimes forced to reject lucrative contracts because they are unable to recruit specialist staff necessary to get the job done. In view of the increasing attractiveness of urban life, the lack of housing is likely to increase even more in the future. Scientists predict that by 2050 more than 80 percent of people will live in cities.

While policymakers have identified and named the problem, the measures taken so far have shown little success. To implement its project to build 1.5 million new dwellings in the current legislative period until 2021 (so-called housing offensive – „Wohnungsoffensive“) and to secure affordable housing, the German Government together with the municipal umbrella organizations and the associations combined in the "Alliance for Affordable Housing and Building" („Bündnis für bezahlbares Wohnen und Bauen“) agreed on the joint implementation of a comprehensive package of measures at the "Housing Summit 2018". In a document summarising the results of this summit meeting which was held on 21 September 2018, the construction of company-owned dwellings was expressly emphasized as a valuable contribution to improve the situation in strained housing markets. Employee housing provides a "great advantage in recruiting employees" and "can be decisive in the choice of the employer". To coordinate the implementation process at the federal level, an interministerial committee of state secretaries headed by the Federal Ministry of the Interior was established.

The BVMW's new SME initiative continues the tradition of company-owned apartments, which had fallen out of fashion after many of the industrial corporations had disposed of their company housing stock. The offer "Job plus Dwelling" will make it much easier for companies to attract qualified specialists and to retain them. That makes employee housing attractive again today.

Many small and medium-sized enterprises would be able to build dwellings for their employees on their own. However, if several enterprises combine their efforts according to the motto "together we are strong" and form a cooperative, the construction of new staff apartments will be considerably more realistic.

At least three companies set up a cooperative for the purpose of attracting potential employees and keeping existing staff by providing affordable dwellings. Member companies send from their midst authorized persons to the management board and the supervisory board of the cooperative. An independent service company supports the cooperative in implementing its purpose on the basis of a management contract.

Each member receives the requested number of occupancy rights to apartments to be designated in advance as part of the membership of the cooperative. Occupancy rights give the right to determine which persons (employees) shall be entitled to use the respective apartments on the basis of a lease agreement with the cooperative. The cooperative then acquires land (ownership or leasehold) for residential development. A pilot project currently implemented in Berlin calculates the costs for acquisition and development at EUR 2,215 per m² of living space.

The cooperative enters into lease agreements with the employees who have been nominated by the member companies on the basis of the occupancy rights. The pilot project in Berlin provides for a net rent of EUR 6.50 per m² of living space, which corresponds to the requirements for promotion of social housing projects by the Federal State of Berlin.

In addition to the capital contributions of the member companies, financing will be provided, in particular, through loans from cooperative members and credit institutions, as well as loans and grants from public development banks (e.g. Investitionsbank Berlin - IBB).

Affordable housing in major conurbations is only feasible where cost-effective construction is made, and land does not have to be acquired at market value, but is provided by the SMEs or the respective municipality below market value or as leasehold.

The building plot can also be located in an heavily built-up urban area or commercial area to allow employees short distances between work and home. The legislator enacted the required legislative amendment in 2017 by introducing the new land-use area category of "urban areas" („Urbane Gebiete“) pursuant to section 6a of the German Land Utilisation Ordinance.

However, employee housing in the private sector requires specific tax incentives to contribute effectively and sustainably to the creation of affordable housing. The Federal Government's bill on the taxation of rental housing construction, which provides for a special depreciation of 5% annually of the acquisition or production costs (max. EUR 2,000 per m²) under further conditions (e.g. maximum acquisition or production costs of EUR 3,000 per m²) does not go far enough. Further investment incentives for the construction of company-owned dwellings would be expedient (e.g. exemption from / reduction of real estate transfer tax).

The concept of employee housing in the cooperative model, which was developed by DSC Legal together with the German Cooperative and Raiffeisen Confederation – reg. assoc. (DGRV - Deutscher Genossenschafts- und Raiffeisenverband e. V.), was recently described as a "very promising approach" by the State Secretary at the Federal Ministry of the Interior, Building and Community, Mr Gunther Adler who is responsible for the areas of urban development, housing and public building law, building, the construction industry and federal buildings. He also emphasized that it is precisely the teaming up of companies for the purpose of employee housing construction at the regional level that can lead to "significant synergy effects and thus lower costs".

The first information event on "employee housing in the cooperative model" took place – with great response - on 15 January 2019 at the headquarters of BVMW. Since then, more events have followed.

Smart and to the point.

Appointments outside office hours
are possible by prior arrangement.